Last week I attended a tara bandu ceremony in Hera, a village about 30 minutes out of Dili, with some colleagues from work and our office’s trusty old camera.

Tara bandu is a traditional ceremony that regulates how land can be used and imposes punishment for breaking the rules. My NGO, RAEBIA, uses it to enshrine regulations about how land can be farmed, to guarantee everyone’s farming in a way that preserves the ecology of the land and ensures its sustainablilty (unfortunately many traditional farming practices here, like slash-and-burn agriculture and free-grazing animals, aren’t well-aligned with conservation principles, or appropriate for communities needing to mitigate against the effects of climate change).

Below are some photos I took at the ceremony in Hera.

The ceremony commences with a tais presentation. Thin tais – traditional woven fabrics – are draped around the shoulders of the ema boot, important people, and the crowd applauds as they parade together back to the marquee where the ceremony takes place.

For the ceremonies I attend, the ema boot are usually my boss and a representative from our donor organisation (US AID, JICA, or UNFAO); a representative from the police and military; a priest; and the xefi de suco, or head of the village. At Hera, my boss’s Portuguese professor was also present – he’s the malae in the vest.

Tais-clad members of the regulation committee proceed with a Timor-Leste flag back to the marquee. RAEBIA introduces the idea of regulated land use to a village, then helps the community form a committee of seven or eight men who determine the village’s regulations. At the tara bandu, these men lead the tais procession and perform the animal slaughter that makes the land sacred. 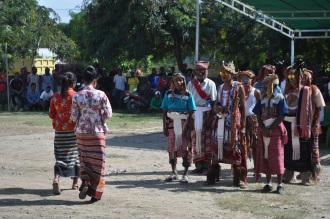 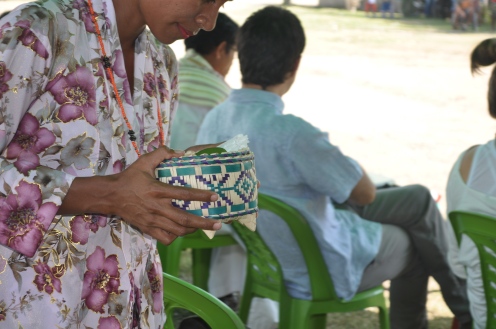 After the procession, the ema boot return to their seats (I’m sitting behind them, facing the members of the village – hundreds of them show up; this is a huge moment for them). Betel or cigarettes are passed out, and the ema boot chew or smoke. Printed copies of the village’s regulations sit on tables before the ema boot.

Then, the regulations are read.

Sometimes, the regulations are also printed on large banners and hung around the ceremony site. They’re extensive, and reading takes about an hour. The villagers listen patiently. 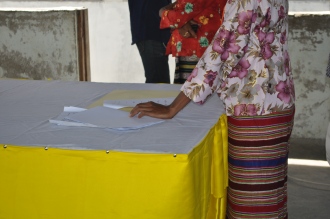 Before the ceremony begins and between each activity, there’s music and singing – and at the end of the formalities, this young man will break out and everyone will dance.

Once everyone’s informed of the regulations – and the punishments that exist for breaking them – the regulations are inaugurated, or enshrined. Traditionally, this involves an animal slaughter (the animal’s blood on the ground is what makes the ground lulik, sacred) – but in a modern Catholic country, tara bandus now add a Catholic mass (in my option, to capture people whose beliefs may have strayed from traditional animism and to whom the tara bandu might not have consequence). 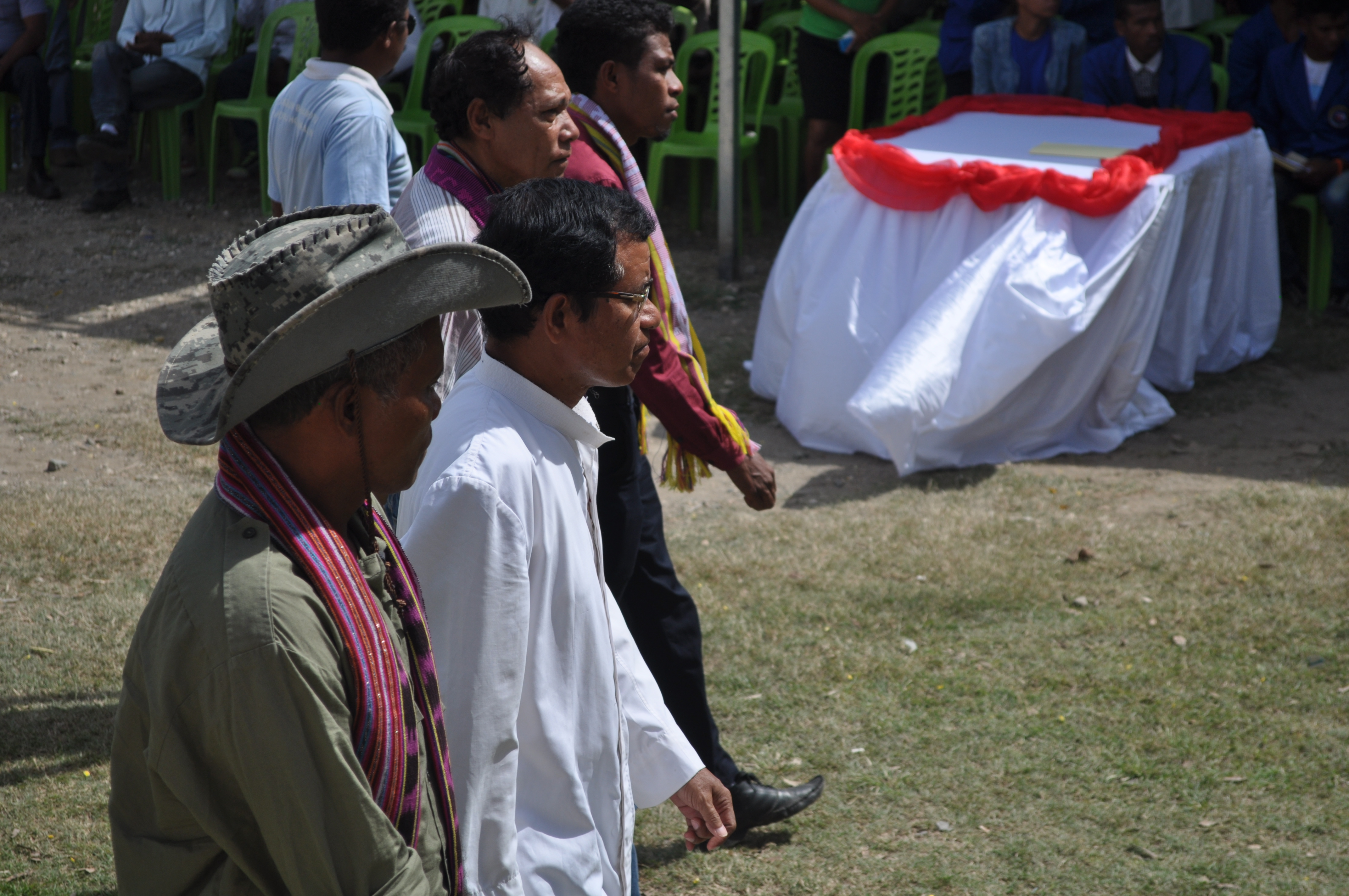 The ema boot lead the procession to the tree-shaded area where the animals are waiting. The slaughter will be performed by members of the regulation committee. 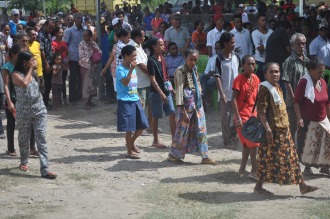 The community follows. Smartphones and cameras suddenly appear. The three photos below are of the swarming crowd and the feathered headdress of one of the committee members, then, after that, there’s a single photo of the cow. It hasn’t been killed yet but it’s tripping over its rope-tied ankle, so if you don’t want to see a distressed animal, scroll quickly past that one photo (I’m a bleeding-heart vegetarian and I’m fine with this photo, but won’t share any photos of the sacrifice after this picture).

In this ceremony, a cow, a goat, a pig and three chickens were sacrificed. I asked a man standing next to me and he told me the quick, spearing method they used for the slaughter was the fastest and least painful one they could choose. My stomach was in knots but I felt like I needed to watch.

The cow (karau) was sacrificed first, then the fahi, pig, then the bibi, goat – and then three village men, wearing tais and mirrored RayBans, held chickens up for the crowd in the final sacrifice. 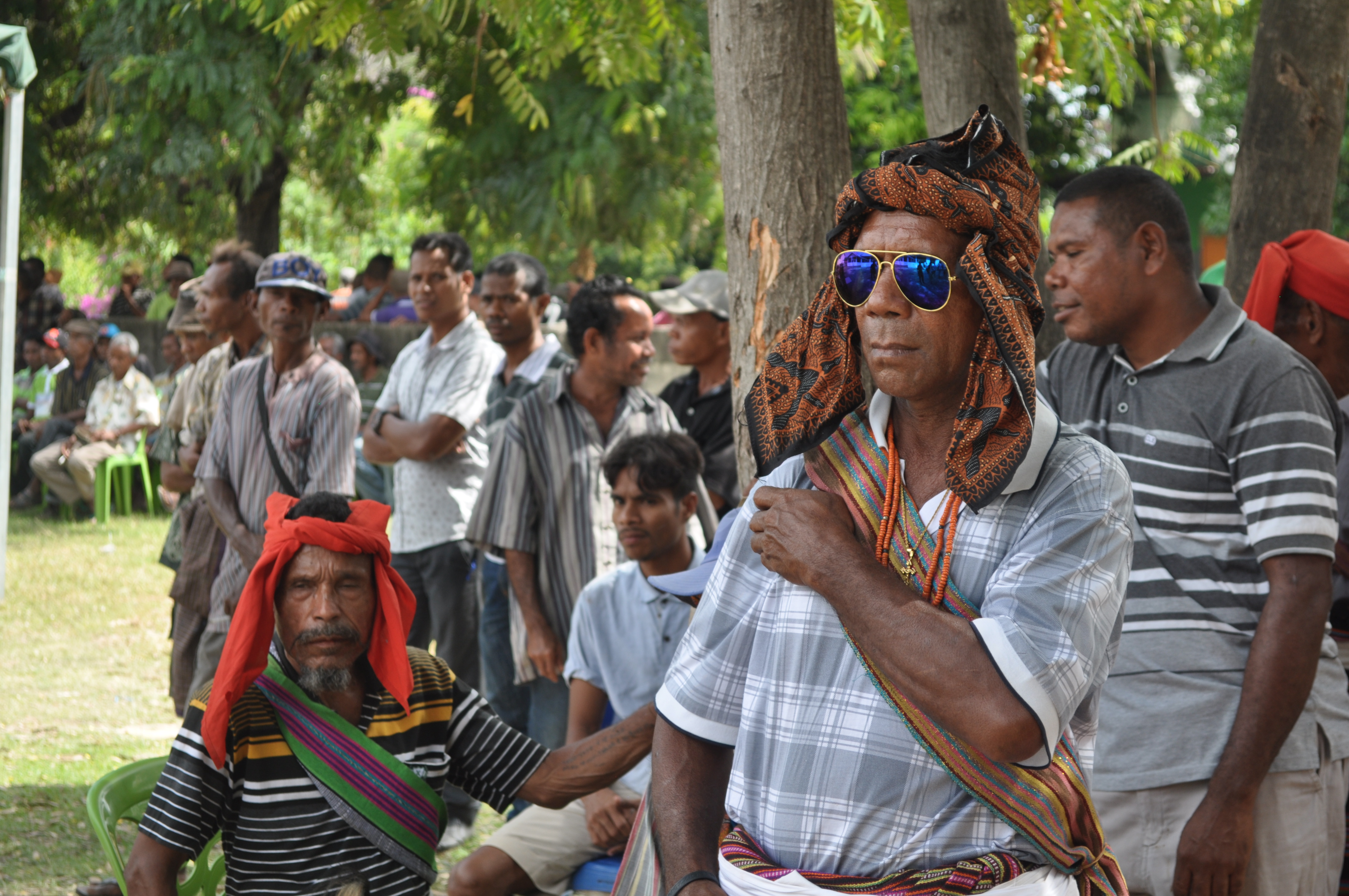 After the sacrifice, there is a Catholic mass, then the regulations are signed – the combination making them official law. Then, each ema boot gives a speech – in Tetun, of course, but the gist I got at Hera was that each implored the village to uphold the regulations and reiterated their significance and value to the community.

Finally, a cake is cut (but never eaten), and warm champagne fizzed and popped opened like an F1 podium celebration. Photos, applause and smiles all round.

Then, lunch! The whole crowd moves down either side of a long, narrow table laden with plates of food. At Hera, there were two types of rice, salad, a dish of cabbage and vegetables, deep-fried bananas, beef skewers (which I would have studiously avoided post-sacrifice even if I wasn’t vegetarian), a pork stew, big plates of tangy green papaya, and Timor’s ubiquitous ai-manus (a chunky, spicy, garlicky salsa used as an accompaniment to almost every meal – its literal translation “hot tree”). Music plays while people eat, and in the background, the committee men are quietly bleeding and carving the sacrificed animals, which will be eaten by the villagers later.

With formalities over, the mood turns visibly joyful, and at Hera I was halfway through my cabbage and banana when I was swarmed by joven requesting photos. For the shot taken immediately after this one, the tall boy smooched my cheek and the photographer fell over himself laughing. 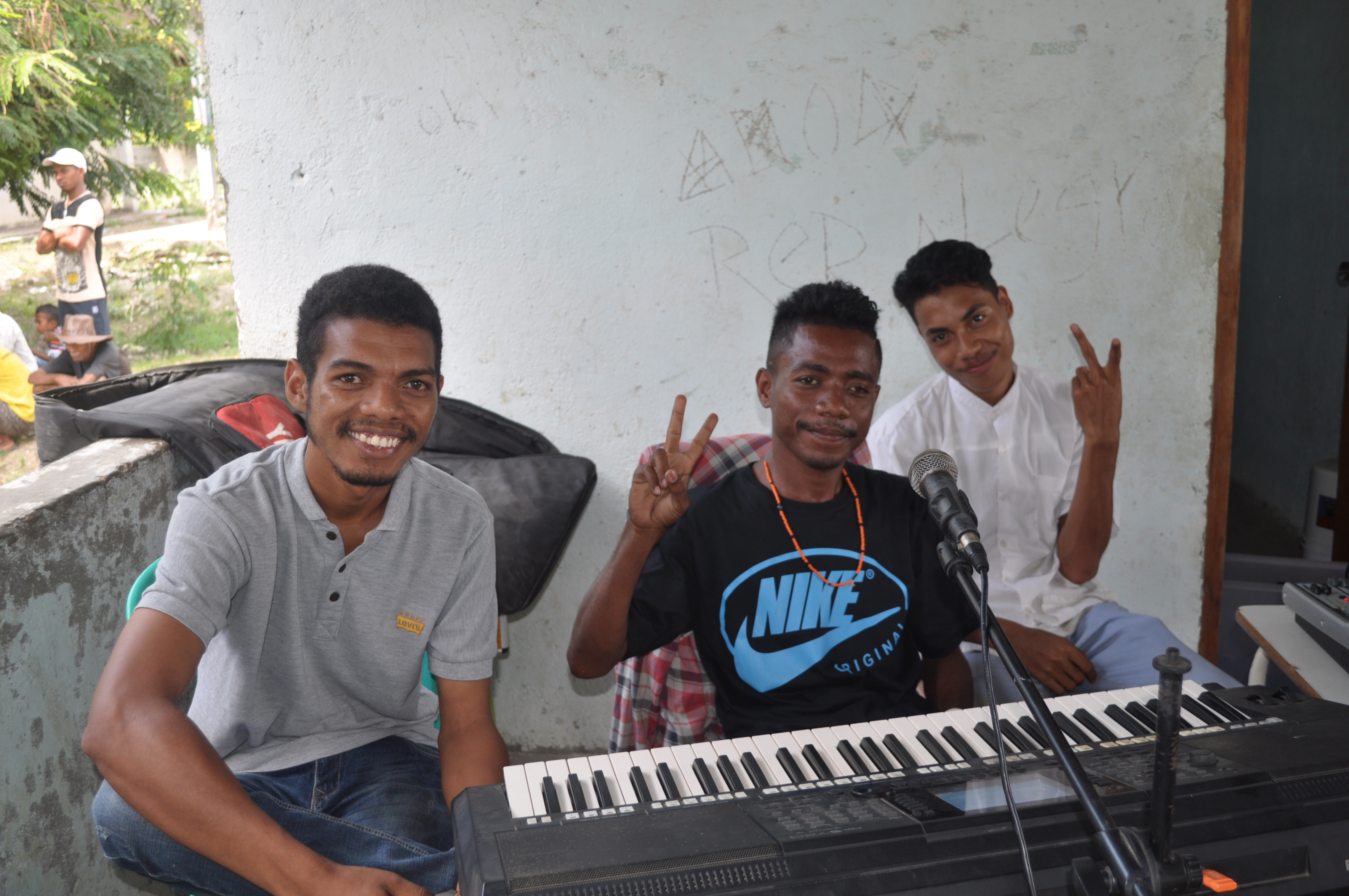 Finally, music and dancing (the Portuguese professor had left by this stage, and as the single remaining – and terribly noticeable – malae, I was shrieked at to dance. A request to which I, of course, immediately obliged). Sweaty palms on a stranger’s shoulder and giggling Timorese teens calling “mana malae, mana malae!“. I was glad I wore my full-skirted dress, even though my nervous side-to-side shuffling never quite met the full twirls I’d imagined.

We’d leave by mid-afternoon, but the party would continue all night. Tara bandu is enormously significant for these communities, and I felt privileged to be able to attend and take some photos to share. Parabens, suco Hera!

Trips out of Dili, Work
ceremony, culture, tara bandu, Timor-Leste, Travel
← Things I miss, month #2
→ Why I ate on $1 a day